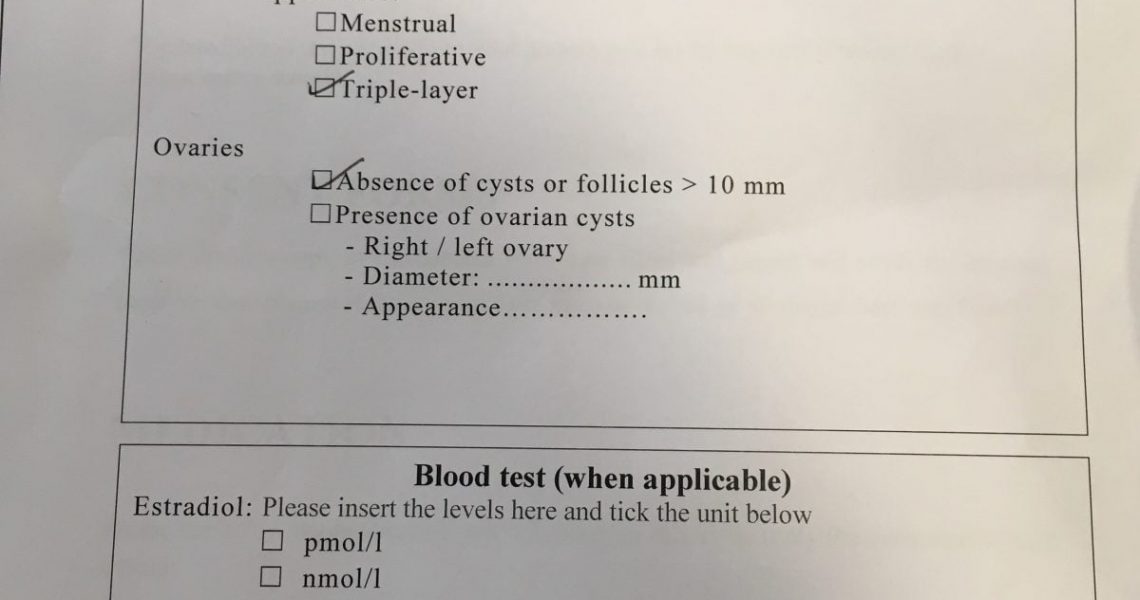 Bracing ourselves for our 5th Attempt

After 2 failed attempts in Barcelona, our consultant requested many additional tests for both Chris and I, as well as some minor surgery.

Following a scan, our consultant requested that I have a slight reshaping to my uterus wall, apparently mine was too straight. I flew over to Spain to get the work done, it was done under anesthetic very quick and simple, not at all painful. I stayed near the clinic for ease rather than on the coastline. It was a good job that I did, because as I got back to my hotel, I realised I’d forgotten to pick up the drugs that they wanted me to have. I jumped back in a cab, to the pharmacy and then back to the hotel, stress I could’ve done without. I treated myself to a nice glass of wine with dinner on the terrace. Early flight back the next day and no one other than Chris had noticed I’d gone, perfect!

I had an ERA Biospy and many bloods, mostly done here in the UK which the helped. I found the Doctors Laboratory and The Nuffield Health blood service the best. From the results, we discovered that I had Thrombophilia, and as a result I need to take; 75mg Aspirin, 800 mg of folate and vitamin B12. My body wasn’t absorbing folate, hence the doubling up and also as a result I wasn’t getting enough B12. All easy to resolve and fix.

We scheduled with the clinics’ immunologist based in Madrid for further investigations. After the call with her, I added an oral spray of vitamin b3 to be taken 3 times a day. This was over and above that which I was getting through the day to day multi vitamins. I also had to avoid taking any spirulina in any vitamins as they do not understand as yet the impact it may have on fertility.

As a result of the findings from my bloods, I also added other drugs / vitamins to my daily intake. I was to follow a low carb diet and to take 1000mg of metformin each day. I was also to start injecting myself with Clexane 40mg a day from the month of transfer . When I started this, I had to stop the asprin. The clinic was concerned that blood was clotting too well and needed thinning. There was also a concern that my body wasn’t dealing with carbohydrates in the way that they would like, hence the Metformin. They explained that for the egg, it would be like hitting concrete, not a warm spongy environment needed for it to nestle in down and embed.

Chris’s tests included DNA Fragmentation and Sperm Chromosomal Analysis, FISH, Karyotype. We struggled to get his done and decided that he should just fly to Barcelona to let them do it. It sounds very flippant, just nipping over there for blood tests, but realistically he could fly there and back cheaper than a return train ticket to London.

On top of the more probing blood results, we both also had to have the normal ones done again; Syphilis, HIV, Hepatitis B&C. These are done every 6 months.

After all of this, we are ready to start our next cycle and its soon time to start with the pessaries and injections again, as well as the other drugs and injections added to the list. Injecting with Clexane every day , wasn’t nice, I was covered in bruises and my skin was getting sore but if it was going to help, then there was no question about it.

It was soon time to scan, to see whether my body was ready for another transfer, to be fair this has never been a problem, so I wasn’t worried.

All was good we were ready to go!

Our transfer booked for February 14th , Valentines day, surely that had to mean something didn’t it! 