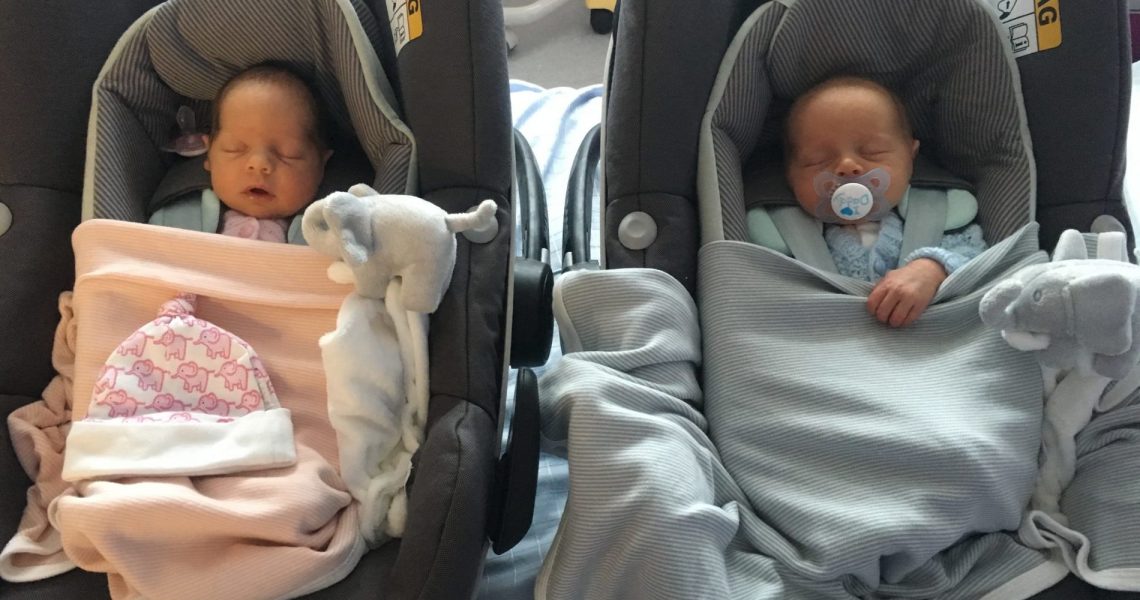 Eventually around 8pm the transport team arrived, Roo & Nelli were checked over by the team and signed off to go, the transfer staff have the final say as to whether a baby can be moved. They were packed in, top and tailing in an incubated trolley, they were firmly belted in together, there was no room for movement in there. They each had a nurse who was there to monitor their sats on the whole journey, the nurses were amazing.

I was travelling in the ambulance and Chris was to follow. All the monitors were explained to me so that I didn’t panic, I was even given a little transport refreshment pack, it had one of those Calypso’s in, I’d not had one of those for years! We got to our hospital in the dark, but it felt good to be on home territory. We were quickly moved up to transitional care and shown to our room, where there were 2 open cots waiting for us, I met the midwives on duty, they showed me around, and most importantly to the biscuit station.

Chris helped us settle in and for the first time in a week he left to sleep at home, and then it hit me. Our babies were now completely dependent upon me, for the first time since they were born, I was alone with them, no wires, no monitors and wait, no heated mattresses that we had been told we would need.

I buzzed the nurse station and asked them for the babies’ mattresses, only to be told that the only reason we were allocated beds, was because they’d been told that the babies didn’t need any support other than possibly tube feeding. We couldn’t have heated mattresses, panic set in, how on earth would I know if they were holding their own temperature all night. Emotion hit me, the realization that the safety of the SBCU was gone, all of our campaigning and pushing to get out and back home had paid off but now I was alone, and I needed to step up quickly. Of course, every mummy has to do this and I’m sure the first time you are alone with your babies it hits you also. I buzzed the nurses every 3 hours or so that night to get their temperature checked, I wasn’t risking anything.

I expressed and fed through the night, I didn’t really sleep, well I got 45 mins. By the morning I was exhausted and while there are nurses there to support you, they also want you to get on with it. I didn’t want to feel like a failed mother buzzing them every 5 minutes. Chris was due to be on a course for work the next day, but he had to come in, I was wiped out both with lack of sleep and emotion.

Over the course of the next few days, Roo & Nelli got stronger, I got more capable, my milk was fully in now and I was getting circa 120ml each time, on top of the feed. It was a very different procedure at New Cross, I guess because it’s a much larger unit, but you have to ask for bottles to express in and then book your milk in and sign each time for it, whereas at George Elliot you helped yourself, microwaved and washed your own attachments and labelled the milk up yourself. It’s strange having to ask each time you need to express, I felt like I was on rations!

Being closer to home meant that our friends and family could visit us, finally we were able to show our babies off. Finally, their big brothers were able to hold them, what an incredible picture that was. We got used to people visiting, and our door was always open, it was amazing, we were so proud.

On one occasion my friend Kate, who I’d met through the NCT meetings, popped in. Her baby was due at the end of November, so she’d been for a check up to the hospital. Kate knocked at our door and without thinking Chris just opened the door wide and invited her in. Now, I know that you lose your dignity when you have a baby, but you do try and hold on to it as long as possible. As Chris lets Kate in, I’m naked down to the waist, I have 2 breast pumps attached to me and I feel like a cow having their udders pumped, in fact I looked pretty much like that as well, I have seen the photos! Not only that, but I was still suffering from cheesy feet and my room really smelt, despite my daily washing and alternating of my, now 2 pairs of compression socks. Poor Kate didn’t know where to look but we looked at each other knowingly, there was no judgment in her eyes, she got it on every level. I think that may have strengthened our fledging friendship!

On another occasion I fed Nelli with a bottle of my milk, that’s all they had with the very occasional formula when my milk supply wasn’t enough for both. I lay her down after her feed to get Roo’s ready and turned around to see Nelli bright red, eyes bulging, being sick and in my panic, I thought she wasn’t breathing. I picked her up and ran into the corridor, luckily a nurse was right outside my door, I thrust Nelli into her arms and said she wasn’t breathing. I was terrified, she was of course, I’d just panicked.

I was then booked on to an hour’s course to teach you how to deal with choking, sleep safety etc. I felt like a complete idiot and incapable, how on earth was I going to cope at home when there wasn’t a nurse a few feet away! Despite this we campaigned to get home and on the Thursday night, it was confirmed that we could go home on the Friday, as long as we had a good night, which we did.

Chris came to collect us, it felt real, car seats at the ready, Roo & Nelli in their going home outfits. I’d picked little elephant gro’s from Jojo Maman Bebe, they looked perfect, it was so exciting. We got discharged mid afternoon and so very proudly walked out of the hospital with our 2 babies, passers by smiling at us. We were so proud, absolutely buzzing, Chris walking with a car seat in each hand, this was the day that we had waited so long for.

The feelings that I experienced while in SCBU were alien to me and were absolutely not how it was meant to be. You take one step forward and two back, premature babies are little fighters, they amaze you, so tiny and yet so strong. They tolerate so much, most babies come into the world and have the peace and quiet of being home, premmie babies spend their first days and weeks surrounded by monitors, loud noises and not a lot of comfort. They have regular heel pricks, so much so that the nurses advise you gently massage your babies’ feet when you get home so that they get used to a gentle touch on their feet, as they associate their feet with the discomfort of needle pricks. For any of us having a needle is bad enough but imagine if your veins are so tiny, even the smallest of needles don’t fit the majority of your veins, then one minute you can see your surroundings the next your back in a mask in the dark as you have a mask on your face to protect you from the ultra violet lights treating your jaundice.

It’s a tough start for your baby, so unlike full-term babies that are born healthy and its very tough on the parents. Other than provide milk, give the odd cuddle and change the odd nappy there wasn’t a lot that I could do for my babies, you feel so helpless and useless at the same time. I had no real understanding of how well or poorly my babies were. I look back now and understand from other forums that, we were extremely lucky, and our journey wasn’t so bad. Does it affect your bonding, yes, I think it does, not long term but in the short term it did for me. I loved them, and I wanted the absolute best for them, I’d have fought a war for them because they were dependent upon me, but the real bond came when I had them home and that’s when I really felt I became their mummy.

I hope you enjoyed this article, thank you for taking the time to read it.